earning, as described in the book Education is a spiritual and evangelistic endeavor.  “It is the harmonious development of the physical, the mental, and the spiritual powers. It prepares the student for the joy of service in this world and for the higher joy of wider service in the world to come.” Ellen White, Education, 13  God, while visiting Adam and Eve in the garden of Eden used their curiosity to reveal more of the wonder of His character.  Even before the fall, God didn’t assume anything about the relationship with His creation.  He actively revealed himself and His love in order that His love would be willingly reciprocated.  “In this communion is found the highest education.  It is God’s own method of development.” Ellen White, Education, 14 With this picture of learning it becomes necessary to consider the methods we use to encourage learning in our own classrooms.  “They (students) need the very best of instruction and religious training. They need that virtue that comes from God, added to knowledge, which will qualify them for trying and responsible positions. The intellectual and spiritual growth should be as marked as the development of the physical powers.” Ellen White, Sabbath-School Workers, Jan. 1, 1889

Because education holds influence on our understanding of the world and the Creator it has been the constant battleground in the Great Controversy.  Over the centuries the methods and motives of educational systems have been shifted both subtly and obviously to influence the world view and values of generations. Often education is one of the first shifts leaders and governments make when they want to change or control their society. Luther and Melanchthon recognized this as they sought to break the control and abuse they found in the church of their day.  “To neglect the young in our schools is just like taking the spring out of the year.  They indeed take away the spring from the year who permit the schools to decline, because religion cannot be maintained without them.” Martin Luther

They identified the transactional nature of the predominant educational institutions of the day as fundamentally broken and dangerous.  "The memory was cultivated as a means of keeping down free activity of thought and clearness of judgement. In the place of self-government mutual distrust, espionage and informing. Implicit obedience relieved the pupils from all responsibility as to the moral justification of their deeds." E.A. Sutherland, Studies in Christian Education, 16-17  Students were encouraged to place higher value on arbitrary titles, pomp and circumstance, using grades to measure themselves competitively to other students, rather than focusing on their growth and understanding of the natural world and it’s creator.  The system Luther and Melanchthon fought against was designed for control and uniformity; in direct defiance to the system of education that God used in Eden. Transactional education shifts the emphasis of learning from discovery and wonder to an abstract and mundane action devoid of a greater calling.  It becomes a method to numb and hold down the very nature of our Creators intent for us now and into eternity.  Transactional education cheapens the act of learning to a transaction of knowledge alone, in the place of meaningful growth and development of a relationship.  In a transactional model making the statement; “My students are grade motivated.” is an acceptable outcome.  But it should be as upsetting as hearing an educator say; “My students are candy motivated.”  “The true teacher is not satisfied with second-rate work. He is not satisfied with directing his students to a standard lower than the highest which it is possible for them to attain. He cannot be content with imparting to them only technical knowledge, with making them merely clever accountants, skillful artisans, successful tradesmen. It is his ambition to inspire them with principles of truth, obedience, honor, integrity, and purity—principles that will make them a positive force for the stability and uplifting of society. He desires them, above all else, to learn life's great lesson of unselfish service.”—Education, 29, 30 (1903).

Education when viewed as an eternal and primarily spiritual endeavor reveals it to be a beautiful combination of the practical, spiritual, and natural relationship with a loving and wondrous Creator. Such an education system should seek something different; originality and independence of mind, love of truth, the power of reflecting and forming correct judgments.  The Adventist system was built to recognize the needs of the individual; creating an education customized and differentiated to the learner.   "Permitting the student in council with teachers, to select subjects according to their future needs.” E.A. Sutherland, April 21, 1919   In this context education is ecstatic, filled with wonder and discovery, a delightful unfolding of a relationship with the Creator. His nature revealed in some new understanding as our curiosity spurs us on to grow.  Creating an individual, "in the image of God, endowed with a power akin to that of the Creator — individuality, power to think and to do.  The student in whom this power is developed are the students who bear responsibilities, who are leaders in enterprise, and who influence character.  It is the work of true education to develop this power, to train the youth to be thinkers, and not mere reflectors of other's thoughts.”  Ellen White, Education, 12  “For teachers to carry out this program, making a successful combination of classroom work and experimentation, or demonstration, the course of study must be reduced to essentials, not only must unimportant subjects be weeded out, but minor details and non-essential portions must be eliminated from those subjects that are retained.  This will reduce that academic corpulence to normal proportions.” E.A. Sutherland, April 21, 1919

In the final chapter of the book Education, Ellen White describes the return of the Eden school to a recreated earth.  “There we shall know even as also we are known.  There the loves and sympathies that God has planted in the soul will find truest and sweetest exercise.”  Ellen White, Education 306  But throughout her writings she seeks to remind us of what the Bible tells us, that Adventists are not to sit around waiting for the return of His perfection, instead we are to take up the ministry He calls us to and actively seek, to the best of our ability, to build Heavens ideals now.  Our role is to equip students to learn for eternity, even more, to love learning for eternity, to be transformative! 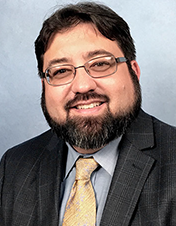 He has been described as an "inspiring and inspired educator"; with 25 years of experience in youth ministry and education.

He has demonstrated an ability to lead and to teach in a genuine and thoughtful manner.

He holds a Masters degree from Pepperdine University in Educational Technology and co-founded teachSDA.